Tribal festivals have religious origins and entwines cultural and religious significance with traditional activities. They divert peoples attention from thier demanding lives and amuse them in their leisure. 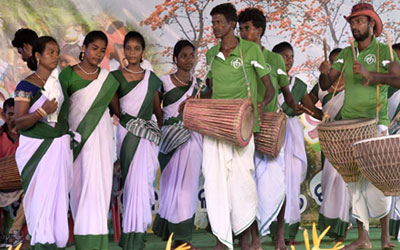 The tribal social and cultural heritage, which is a mixture of customs, traditions, moral values, attitudes, festivals, folklore, beliefs and ideals not only defines who the tribals are but also binds them to pass it on from one generation to another. Festivals have both social and economic angles. Festivals give the tribals the opportunity to forget all their worries and celebrate the positive side of life, even if it is for a few days and on particular occasions.

Festivals, apart from being traditions, are a great way to renew and refresh tribal cultures. This is an effective way of recalling their culture and tradition. It is during festivals that the tribals socialize and break the monotony of their lives. Pleasure takes the centre stage of most of the tribal festivals. Festivals act like stress relievers and help the tribal people balance their emotions.

Every tribal community has its own set of festivals, though some of the festivals are common to most of the tribal communities. It is also a fact that while a tribe may have large number of festivals, two or three of them may be very important and likely to be observed by all. Three kinds of religious activities such as worship of nature and natural objects; worship of ancestors; and worship of gods and deities form the foundation of tribal cultural festivals.

Agriculture, in addition to religion and folklore, has significantly contributed to the tradition of tribal cultural festivals. Many festivals across tribal Odisha are associated with agricultural operations at different stages, and mainly with harvest. Religious festivals like Chaita Parab, Karama, Kedu, Meria, Bali Parab, Maghe, Bada Jatara conducted by different tribal communities have gathered cultural significance over the centuries. These festivals contribute immensely to feelings of social cohesion.

Many such celebrations focus on cultural or ethnic aspects and seek to inform community members of their traditions. They involve community elders sharing stories and experiences; setting templates for dance, music, games and sports; sharing songs and folklore; exhibiting costumes and culinary traditions; and above all the community and inter-community relations.

In development context, be it cultural or religious, the tribal festivals play an important role in showcasing traditional handicrafts, spotting artistic and sports talents, exploring ways and means for development communication, and above all revisiting traditions and cultures. In tribal cultures, festivals allow them to socialize better, unite and come together; remind themselves of their predecessors, heroes and role models; recall their spiritual duties; perform good activities on a larger social platform that are not possible on individual or small team level; and take a break from regular routine chores. Tribal festivals are social institutions which promote feelings offellowship and brotherhood among the members of the group that celebrates them.