Sports and games are leisure and recreation activities enjoyable, inexpensive and played with minimum instruments in tribal areas. The tribal sports talents have reasonable physical fitness, strength, speed and stamina and thus have the potential to excel. 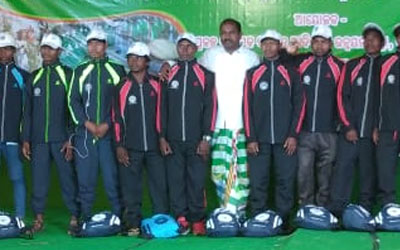 Sports have been invented across different cultures primarily as a means of displaying skills and physical prowess and to entertain or offer excitement, often through social and cultural processes. In tribal cultures, most of the games involve some form of running, throwing and jumping acrobatics, all of which developed from basic hunting skills. Many tribal cultures combined religious and political elements into their games. While some local sports and games have become universal in course of time, many have remained confined to local traditions.

Preamble of National Sports Policy, 2001 states that - activities relating to sports and physical education are essential components of human resource development, helping to promote good health, comradeship and spirit of friendly competition, which, in tum, has a positive impact on the overall development of personality of the youth. It clearly spelt out the need for establishing a network of sports infrastructure and facilities in the rural and urban areas. However, before and after the policy was formulated and implemented ,many sports schemes and programs encompassing broader objectives of promotion of games and sports in India have been launched by Government. Panchayat Yuva Krida Aur Khel Abhiyan (PYKKA) a flagship program intended to create opportunities for more people to participate in sports activities; broadening the base for scouting of talent for competitive sports; and promoting excellence in sports. Indigenous games are being promoted through schemes related to rural sports & Northeast Sports Festival.

In Odisha there are many tribal sports luminaries who have added to the glory of Odisha by performing at National and International sports events. Sports as culture is emerging in tribal clusters, especially where outstanding sports persons have brought laurels to the State. In consideration to required institutional set up for promotion of games and sports in tribal areas, Odisha stands at a better position compared to any other tribal dominated States. There are still hundreds of unnoticed sports talents in tribal areas who have the potential to excel in the recognized sports categories. Thus scouting for such talents and investing in their skill development from a very early stage on a wider convergence platform is the need of hour.

In this context, the Special Development Council has undertaken the activities of block and district level sports meets intending to scout for sports talents and to ensure that not a single sports talent is left unidentified. Through this SDC is making an attempt to generate sports consciousness and mass participation in sports in SDC districts; to strengthen sports at the grass-root level; and to provide opportunity to tribal children to get noticed for further nurturing. SDC also intends to conserve the indigenous games and sports as part of intangible cultural heritage of tribal communities of Odisha.

Indigenous games in tribal cultures are an efficient means of conveying values of solidarity, diversity, inclusiveness and culture. Most of the traditional games and sports, expressions of indigenous cultures and ways of life have already disappeared and those that are surviving are threatened with imminent disappearance and extinction due to several factors. Tribal communities of Odisha have exclusive tradition of games performed by the men, women, and children of all age groups. Traditional games are the products of society or culture and they have enriched the heritage of tribal society. Many traditional games of Odisha are associated with rites and rituals.

Traditional games are not only for physical strength but are also a means for mass entertainment. Impulsive exchange of lore element of a given community is also done in between the performance. Performance of traditional games creates a bridge of unity between playgroups as well as in society. The players learn successful application of skill and imitative knowledge from traditional games; and this knowledge is transmitted from one generation to another. In this way the traditional games has a great educative value inculcating socialization, proper behaviour, friendship, unity, discipline, social rule and cooperation.

Sports Competition at block, district, state and national level; and Competitions in Left Wing Extremism Affected Areas (LWEAA) which were very relevant in the context of promoting tribal sports talents. The SDC intervention in this area is thus very relevant.