Tribal Dances in different forms and features give the realities of life in its bare form. It is their way of life, soul and spirit and mark of ethnic identity. 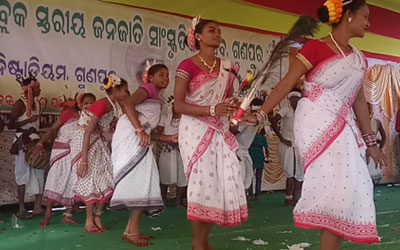 Performing art forms are the methods through which tribal customs and cultures are kept alive and through which the children become part of that culture by inculcating those ideas and customs, through songs and dance.

Dance has no language. In order to understand the beauty of the dance and what dancers want to express one does not need to know any particular language. Tribal dance involves not only dance performance, but traditional ethnic music, costumes and attributes as well. So, through the traditional tribal dances people can get acquainted with one or another's culture.

There are many tribal dances that are performed for various reasons in various seasons. In the event of agricultural cycles and festivals, life cycle rituals and special occasions, propitiation of gods and goddesses and their appeasement, tribals perform and display distinct dance forms. Tribal cultural dances connect them directly from the present through to the past. It brings back remembrances of their ancestors' culture, heritage and psyche. Each dance form is unique in step and design; as it is related to the life style of the local population. It is usually passed on from generation to generation. It is a wonderful and meaningful way to stay in touch with their cultural roots.

Traditional tribal dance forms are not just reminiscence of the past but act as a passage through which they pass on ideas, values and knowledge experienced and gained by their ancestors. Tribal dance consists of a unique dance style. They represent many things- folklore, social systems, and community life, to name a few. Each dance is symbolized by specific costumes and music. Men and women usually have specific roles that they play in various tribal dances. However, there are dances in which men and women dance together. Each tribe has its own tribal dances; each with their own meamngs.

Tribal dances have been able to retain their distinctions so far .However they may disappear or become adulterated with incorporation of elements from other dances if they are not preserved in their original form.