Odisha occupies a unique position among the Indian States and Union Territories for having a rich and colourful tribal scenario. Majority of Scheduled Tribes live in hilly and forest regions. Their economy is largely subsistence oriented, non stratified and non-specialized. Their social system is simple and aspirations and needs are not many. Though the Scheduled Tribes in Odisha have suffered from social, educational and economic backwardness due to geo-historical reasons, they have their own distinctiveness and social-cultural milieu. The process of socio­economic development is going on after independence and has picked up momentum. 62 Scheduled Tribes in Odisha speak as many as 74 dialects. Their ethos, ideology, worldview, value­ orientations and cultural heritage are rich and varied. At one end of the scale there are nomadic food gatherers and hunters and at the other end, skilled settled agriculturists and horticulturists. The tribal areas of Odisha, therefore, present an extremely diverse socio-economic panorama.

As per the Census 2011, the state of Odisha has the third highest percentage of tribal population in the country which stands at 9590756. The state has the unique distinction of having 62 different tribal communities spread over 30 districts and 314 blocks. They constitute 22.85% of the total population of the state and contribute 9.17% to the total tribal population of the country. The growth and distribution of ST population have got special significance. Therefore, analysis of distribution and location of scheduled tribes in Odisha is extremely essential for meaningful planning, research and policy formulation. 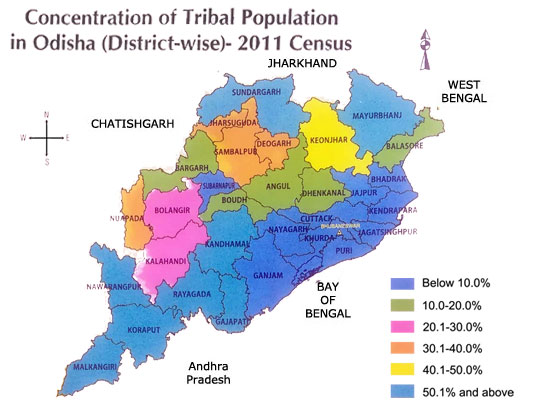