The Tharua is an artisan community called by other names like, Tharua-Bindhani, Tharua- Kumbhar, etc. They live either in uni-clan homogeneous villages or in separate hamlets in a multi-ethnic village. Famly is nuclear, patrilocal and patrilineal. A few cases of vertically extended families are also seen. The community is endogamous and divided into a number of exogamous totemic septs, such as, Kachim, Latha, Supala, Ahadar, Kanyari, Dhakitanga, Bhuiyan and Tetenga etc. Family is monogamous and marriage through negotiation is the common practice. Other modes of marriage are by capture, by mutual consent and by service. Besides, junior levirate and sororate, cross cousin marriage, remarriage of divorcees, widows and widowers are permitted in their society. A few cases of polygene are also found in their society. The Tharua practise cremation for dead. Death pollution is observed for ten days. Their traditional priest officiates over their socio-religious functions. They have their own traditional community council. The regional head is called Behera. Lord Viswakarma is their principal deity worshiped during Viswakarma Puja along with their pottery wheel. They worship their village deities such as Raudia, Thanamatho, Maisasuri, Handia, Gamho and Kuli. 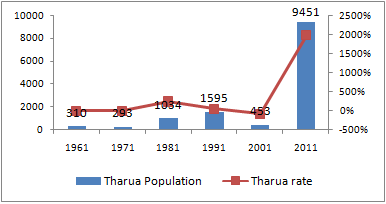 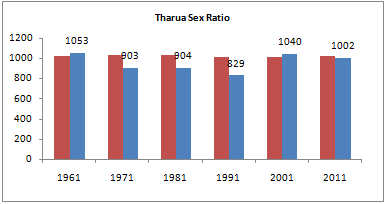 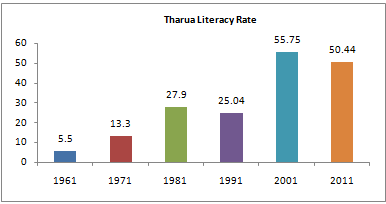