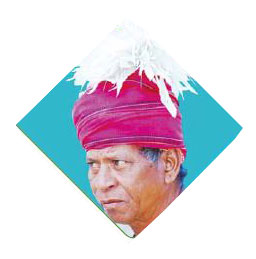 They are an ancient folk who have been mentioned in old mythologies and Sanskrit literatures. Being hardy highlanders they live in remote mountains of southern Odisha. They are so enterprising that they have tamed rugged mountains by making picturesque terraces with ingenious water management systems for paddy cultivation and by raising vast orchards. They are artists by nature who can compose and sing songs instantly and make beautiful wall paintings (ikons) which have made them famous over the world. They worship innumerable gods and spirits and appease them by conducting elaborate and expensive rituals and ceremonies. They are called Saora or Soura. The Saora are a PTG in Odisha. The Saora settlements are located in undulating terrain and houses remain scattered. Close to the settlements megaliths are erected to commemorate the dead kins. An ordinary house is a one-roomed thatched rectangular dwelling having stone and mud walls with high plinth verandah. The guardian deity of the village is represented by two wooden posts, called Gasadasum or Kitungsum installed at the entrance of the settlement. The Saora pantheon includes numerous Gods, deities and benevolent and malevolent sprits. The aesthetic life of the Soara is reflected through their colourful dance, typical music and the wall paintings (anital / idital) in particular. Traditionally the men used to wear loincloth and women a skirt. The latter use ornaments to adorn their ear, nose, waist and ankle. The Saora society is divided into 25 subdivisions based on occupation, food habit, social status, customs and traditions. Gomango is the secular head of the village. He is assisted by buya, the ritual head. Disari is the village Astrologer. The family is mostly nuclear, patrilocal and patrilineal. The well to do family practise polygene. Absence of clan organization and existence of Birinda, the extended family is characteristic of the Saora social organization. Women even after marriage continue to belong to the parental birinda. 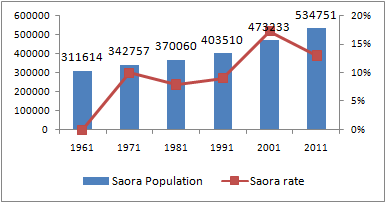 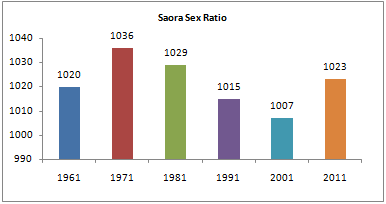 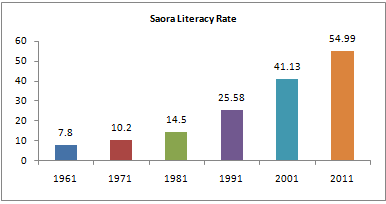