The SANTAL is the third largest tribe in India after the Gond and the Bhil. In Odisha the tribe is divided into several totemic exogamous clans, Paris. Each clan is further divided into sub-clans, maximal lineages, Bansa, and minimal lineages, Kutum. The kinsmen, at the level of broad groups refer to each other as kutum pele, lineal kins and bandhu pele, affines. The Santal settlements have parallel rows of houses facing the common street. In front of the house of Manjhi, the village Chief, they have Manjhithan, the sacred place and the seat of Manjhi-haram, the founding ancestor deity. Jaher- the sacred grove in the outskirts of the village is regarded as the abode of all Santal deities. The Santal build beautiful multi-roomed houses of definite artistic design having spacious compounds and courtyards. They paint the walls with different colours, mainly red and black. They observe Janam Chatiar, the purificatory ritual on the seventh or ninth day of child birth, and natyam, the name giving ceremony within one year. Death rites are observed within ten to twenty days of death. The common types of marriages permitted in their society are by negotiation, by elopement, by intrusion and by service. Junior livirate, sororate and remarriage of widows, widowers and divorcees are also permitted in their society. Sing Bonga- the Sun God otherwise called Thakur or Dharam is their Supreme Deity who is revered as the creator of the universe. Their important village deities are Marang Buru, Monreko Tureiko, Jaher Era, Gosani Era and Manjhi Haram. Besides there are a number of other deities like hill and forest deities, earth goddess (Basumata), ancestal spirits (Hapranko Bonga), household spirits (Abe Bonga) etc. The traditional village council is headed by the secular chief, Manjhi assisted by Paramanik, the deputy chief, Naik, the village priest, Jog Majhi, the moral guardian, and Gadet, the messanger. At the intervillage level they have inter-village council called Pirha or Pargana. They have developed a script called Olchiki. 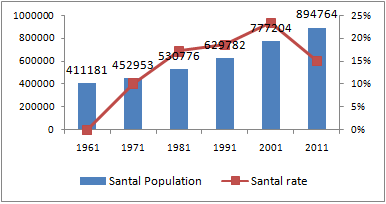 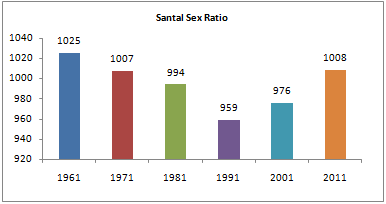 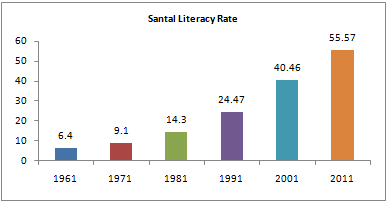