The Rajuar has synonyms like Rajbansi, Rajwar and Rajualas and claim equal social position with that of the Bhuyan citing about their Kshyatriya origin. The Rajuar’s settlement pattern is traditionally uniclan and homogenous. In multi-ethnic villages they live in separate hamlets. Family is predominantly nuclear, patrilocal and patrilineal. The tribe is divided into three exogamous septs, such as, Nageswar, Sankha and Kashyapa. Monogamy is common practice in their society and marriage through negotiation is regarded prestigious. Cross cousin marriage, junior levirate, junior sororate, remarriage of widows and widowers and divorcees are socially permitted. Other forms of marriage are through mutual consent and by service. Bride price is obligatory and is paid both in cash and kinds. The Rajuar usually practise cremation and in circumstances of unnatural death they bury their dead. Death pollution is observed for eleven days. Birth pollution is observed for nine days and name-giving ceremony is held on twentyfirst day. They observe puberty rites for adolescent girls. The pollution period lasts for seven days and the girl remains in seclusion. The Rajuar profess Hinduism and worship Hindu deities like Laxmi, Kali, Durga, Siva and village deities like Gaon Thakurani, Chandi, Basuli, Situli, etc. They have their own traditional community council. The headman of the community is called Paramanik who is assisted by a Chatia who acts as a messenger-cum-assistant. 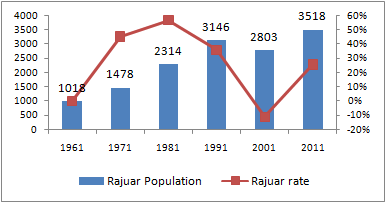 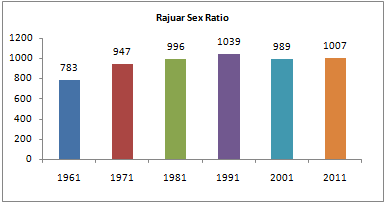 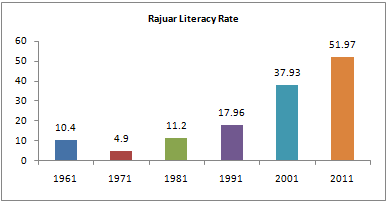