The PENTIA is otherwise called Penthia and Pentiya Holva, Holuva or Halba. The tribe is divided into two endogamous sections i.e. Bada and Sano which have several exogamous totemic septs like Surya (Sun), Mankar (monkey), Bagh (tiger), Nag (cobra), Kurum or Kachop (tortoise), etc. The Pentia family is generally nuclear, patrilocal, patrileneal and patripotestal. Marriage through negotiation is regarded as most desired mode of acquiring mates and cross cousin marriage is permitted. Few cases of junior sororate and junior levirate are reported. Though polygene is not disallowed, monogamy is commonly practised. Remarriage of widows, widowers and divorcees are permitted. Bride price both in cash and kind is paid on the date of solemnization of marriage. Other modes of marriage are through elopement and capture, where parental consent and payment of bride price is not easy to come. The Pentia practise both burial and cremation. They observe death pollution for a period of ten days. Besides their own deity, Nissani and Thakurani, they worship Hindu deities like Gupteswar and Lord Jagannath. Pentia have their own traditional village council headed by Naik and an inter-village council headed by Bhata Naik or Kul Naik that settles intra- and inter-community disputes. They are fond of dance and music during various festive occasions. 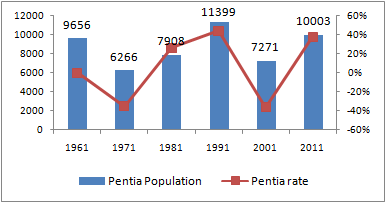 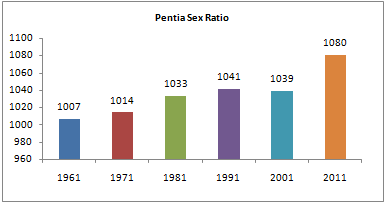 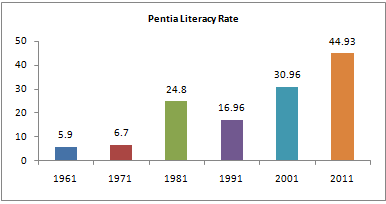