The name PAROJA, is derived from the local Odia word Praja or Paraja meaning the common people who are tenants or subjects or citizens under ex-feudal lords or Raja. The tribe is divided into two broad sections: the Bada Paroja and the Sana Paroja. Each section further divided into two sub-sections: Bada Paroja or Sodia Paraja and Bada Jodia Paraja or Penga Paraja under the former, and Bareng Jodia Paraja and Konda Paraja or Selia Paraja under the latter. The major distinction between both the sections is that the Bada Paroja are more Hinduised than the Sana Paroja. The former do not take beef. They observe elaborate purificatory rites in the event of the death of a cow or buffalo in their household while the latter are said to be beefeaters. Among all the four sub-sections the Selia or Chhelia who were goat-breeders in the past are given the lowest rank. The Paroja live in big and small settlements in the company of other communities. The villages lie in the plains, at the foothills and near forests in close proximity to hill streams. The Paroja prefer adult marriage, monogamy, cross-cousin marriage and village exogamy following the rules of clan exogamy. Marriage by negotiation is relatively an expensive affair. Those who cannot afford it resort to other means, such as capture (jhinka-utra), elopement (udlia), levirate, sororate, etc. They observe birth pollution till the naval cord of the newborn dries up. The affairs of a Paroja village are managed by a set of traditional leaders designated as muduli, the secular chief, jani, the priest, and challan, the messenger-cum-assistant. Other important magico-religious functionaries are disari, gurumai, gunia and bhatanaik. Their artistic talents find expression in Dhemsa and Dungdunga dances and Laga songs. 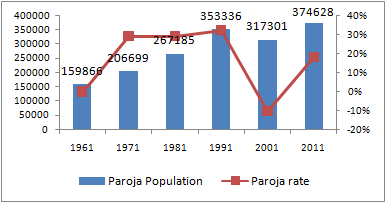 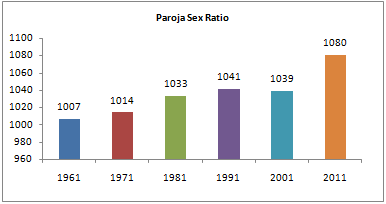 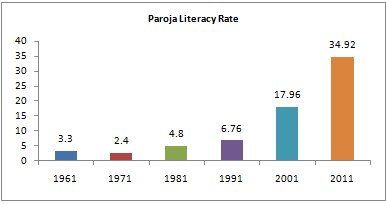