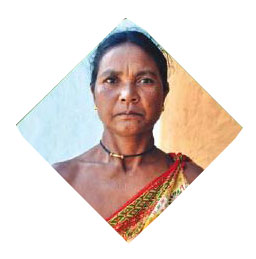 PARENGA is believed to be a sub-tribe of Gadaba of the Munda Group. According to their annals, their nomenclature Peranga has been derived from the term kerang, as they prepare their apparels out of kerang fibers during past. The community is divided into two subgroups (bansha) such as vaishya and putuli which again has been subdivided into a number of totemic septs viz. Ontal (Cobra), Khara (Sun), Khilla (tiger), Pangi (vulture), Khinbudi (bear), Machha (fish) and Golari (serpent) etc.. The Parenga family is nuclear, patrilocal, patrilineal and patripotestal. Junior sororate, junior levirate and cross-cousin marriages are prevalent among them. Marriage by negotiation (Raibadi) is considered ideal and prestigious. Marriage by capture, elopement, exchange and by service is in vogue. Family is monogamous, nuclear, patrilocal and patrilineal and remarriage of widows and widowers and divorcee are allowed. Bride price costing around Rs.2000/- includes a goat or a sheep, rice beer and food grains. Divorce is approved by the traditional council of the village elders. The Parenga practise both cremation and burial. Dom musicians beat the drum when the corpse is carried to the burial ground. They observe death pollution for five days. Besides their own deities like Nissani, Nangseri, Budha Bhairab and Mangal Pura they worship different Hindu Gods and Goddesses, visit Hindu temples and observe Hindu festivals. Naik is the traditional village headman. Disari and Sisa, the ritual functionaries also assist the Naik in managing the village affairs. The regional head is called Bhata Naik. They have preserved their rich tradition of dance and music. Their popular dance forms are, Dhemsa, Ghumura, Gottar and Lathidudia performed on various festive occasions. 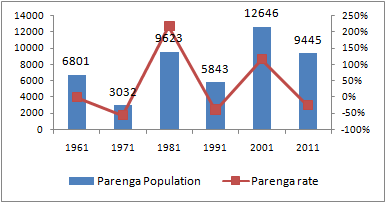 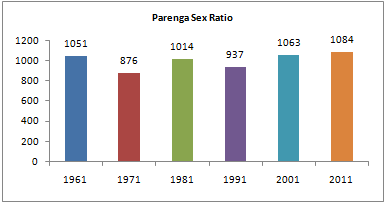