The term Mankirdia is the local name of the Birhor tribe. The local people used to call the Birhors in different names. In the district of Kalahandi and Sundargarh they are named Mankidi whereas in Mayurbhanj and Sambalpur districts they go by the name Mankirdia. The reason for calling the Birhors, Mankidi or Mankirdia is that they are skilled in catching monkeys. When these monkeys create havoc in the rural areas and destroy crops, fruits and vegetables, the local people employ these Birhors to catch them. They are a primitive tribe and nomadic in nature. They are an endogamous community and are divided into two divisions i.e. the Uthalu (nomads) and Jagi (settlers). They usually dwell in small bands (Tanda) composed of 10-15 families and live in typical dome shaped leaf huts called Kumbha. The Tanda is generally set up in a place close to the forest and not far away from market center and peasant villages. Besides the Kumbhas belonging to the individual families, there are two other units, Dhugala, used by the unmarried boys and Kudi Ada, used by the unmarried girls for sleeping at night in every Tanda. They practice monogamy. Mankirdia family is mostly nuclear, patrilocal and patrilineal. There are two other units, Dhugala and Kudi Ada used by the unmarried boys and girls respectively for sleeping at night in every Tanda. They practice marriage by negotiation, by exchange, by elopement etc. Cross-Cousin marriage is absent but junior sororate and levirate types of marriages are prevalent in their society. The Birhor are skilled monkey catchers and siali rope makers. The frequent change of settlement is primarily made in search of forest produce. They practice burial to dispose of their dead. 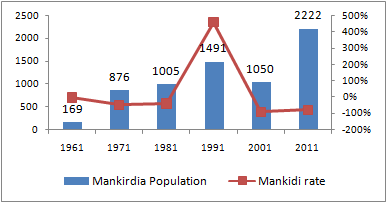 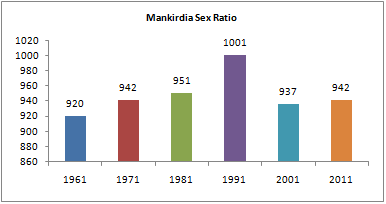 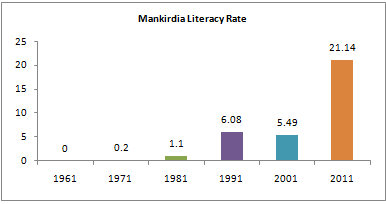