LODHA was known as a criminal tribe until the revocation of the criminal Tribes Act in 1956. It is widely accepted that the tribe derived its name from the word lubdhaka meaning the fowler or trapper. They claim their ancestry to Byadha or Kirata, the Savara king Viswabasu and consider Lord Jagannath as their supreme deity. They take pride in giving their identity as Lodha Savar. They have exogamous totemic clans like Bhotda, Malik, Bag, Nayak, Dandapat, Paramanik, Ahori, Bhuria and Kotal. They practise clan exogamy. Child marriage is still prevalent among them. Adult marriage and marriage by negotiation are commonly practised. Besides, instances of other kinds of marriages, such as child marriage, love marriage, marriage by service, marriage by exchange of sisters, ghar jamain type of marriage, levirate, sororate, and the remarriage of widows and divorcees are also found. The practice of bride price is still in vogue. Birth pollution is observed for 21 days. On the 21st day a purificatory ritual called ekusia is performed. After six months the hair-cutting and ricefeeding ceremonies are held on a Tuesday. The Lodha have their own traditional village panchayat called desh. All adult male persons are members of the panchayat, which decides offences relating to the violation of tribal customs, norms and taboos. The village headman, called mukhia or sardar, presides over its meetings and gives his verdict in consultation with senior members. He is assisted by the village messenger, the dakua or athgharia. There are many magico-religious functionaries viz. deheri, the village priest, talia or chharidar, the assistant to the deheri, hantakar, the ritual sacrificer, gunni, the medicine man, byakra, the shaman, in Lodha villages. 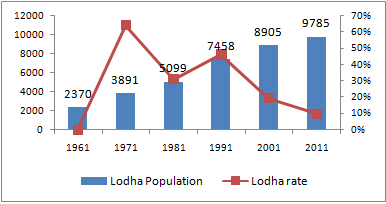 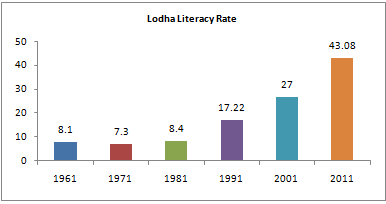