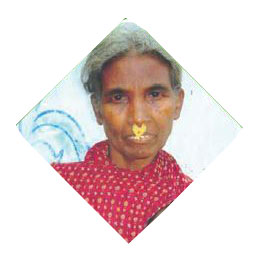 The name Kora, Kuda or Kura “seems to be a generic name signifying the occupation of earth digging”. Economically and occupationally, the Kora are noted for their traditional skills and specialization in digging tanks and doing other kinds of earth works. In course of time they have added the trade of Catechu-making for which their neighbour called Khaira or Khayra. Now they are settled agriculturists. The tribe is segmented into several endogamous groups. The Kora of Odisha claim that they belong to the Suryavansi group. They are divided into a number of totemistic exogamous septs (gotra) such as “Kaich, Nag, Mankad, Khapur, Dhan, Nun, Adower, Maghi, Prodhan, Bagha, Bahera etc. and are further divided into lineages. They are patrilineal and patrilocal. Nuclear family and monogamous marriages are common in the Kora society. The most common and ideal type of marriage is by negotiation. However, polygyny, cross-cousin marriage, junior levirate, junior sororate, marriage by elopement, by capture, divorce and remarriage of widows, widowers and divorcees are also permitted. Bride price is paid in cash. They observe post-natal pollution for 21 days. They cremate the dead for natural death and practise burial in cases of unnatural deaths. They have their traditional panchayat headed by Majhi who is assisted by Parmanik. It plays an important role in ensuring conformity to their social norms and traditions. It deals with customary matters like breach of norms of clan exogamy, killing of cow, sins of suffering from dreadful diseases, and the like. 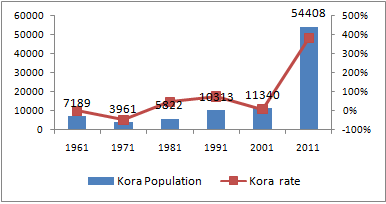 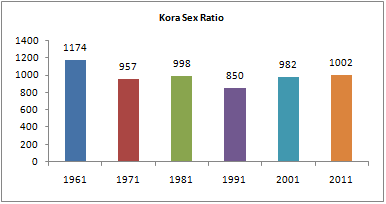 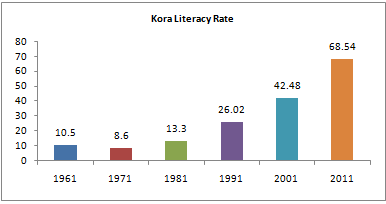