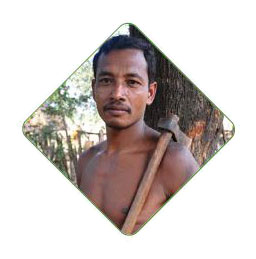 The Didayi is a small community of hill dwelling tribe of south Odisha, Their neighbours call them ‘Didayi’ - the wild people but, they themselves give their identity as Gatare - “the people”. They recount the legend that they are the younger brothers of the neighbouring tribes, such as, the Bondo, the Gadaba and the Paraja. They are found only in 42 settlements scattered over a compact patch of remote hill country in the Kondakamberu ranges of the Eastern Ghats. Didayi settlements have scattered houses located adjacent to hill streams. The houses are enclosed with bamboo wattle fencing. The central place inside the village where community activities like rituals, dances and meetings are organized is called gulisung. Five totemic clans (bonso), exogamous segments characterize the social structure of Didayi. In a clan there are agnatic lineages, brea. Marriage is the most important and colourful event in Didayi life. Men and women are relatively free to choose their mates. They acquire mates by negotiation, elopement, intrusion and service. Widow remarriage, levirate and sororate are in practice. Adult marriage and monogamy is common among them. The custom of bride price is prevalent. Didayi perform elaborate mortuary rites. Mourning is observed for ten days. Purificatory rites, dasa, is observed on the tenth day in the company of kinsmen and fellow villagers. Socio-political affairs in Didayi village are managed by the traditional village council called lepar. The traditional village priest, palasi, the secular chief naik and messenger challan are the functionaries. 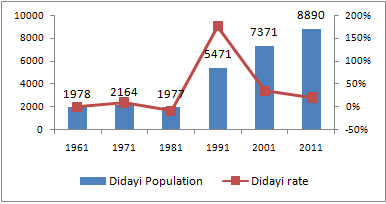