The Dharua is a little known tribe of the State. They are one of the Gondid tribe and otherwise referred to as Dharua Gonds. The term Dharua, has been derived from Dhur meaning dust for which the community is regarded as a discrete group among the Gondid Tribe. Etymologically, the ‘Dharua’ has been assumed to have derived Dhara, meaning to catch, as their traditional occupation is to catch, reptiles, birds and wild games from the forest. In the past, the saying goes, the tribesmen served as warriors to the kings. The endogamous community is segmented into two groups such as bara and chot on the basis of the purity of descent. The tribe is divided into clans and sub-clans. Each subclan, vansa, is named after a mythological Rishi who is represented by a totemic animal following the Hindu Puranic traditions. Dharua practise arranged marriage. They perform sindurdan, the ritual of marrying to a mango tree. They follow the rule of patrilocal residence after marriage and patrilineal rule of descent. The Dharua profess their autonomous tribal religion of animism with admixture of few elements of Hinduism. They are polytheists, and their pantheon includes a number of tribal deities such as istipal, gramsiri, garam, ramkin, barapahar, buradeo, bhairab buri, gaisiri, bhagat buri, gajan, nangeswari and dakin and Hindu deities like Jagannath, Laxmi, Mahadev, Kali, Durga, Sital and Manasa etc. They also believe in the existence of ancestral spirits, ghosts and witches. They appease the supernatural agencies by offering food and animal sacrifices. They cremate the dead and observe death pollution for three days. They possess their own highly organized traditional community council headed by Sardar. It adjudicates cases pertaining to their customary matter and delivers its final verdict. 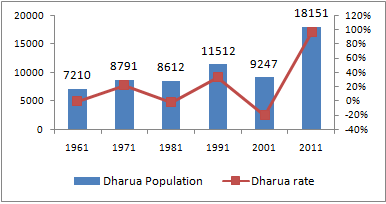 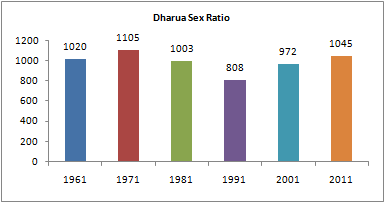