The Bondo Poraja / Bonda Paroja are a primitive tribe in Odisha. The tribesmen identify themselves as ‘Remo’ (man). Their neighbours call them ‘Bonda’. Though few in numbers, the tribe has successfully retained the distinctive features of its culture, chiefly due to its geographical isolation, and more perhaps due to its stubborn and independent spirit. The tribesmen exhibit great differences in appearance, customs and character from other tribal groups. Their unique style of personal appearance distinguishes them from rest of the world. Bonda men wear a narrow strip of loin cloth (gosi). It is the women’s attire that is so remarkable. A taboo backed by legends prevents women against clothing themselves above the waist. They make up this very patent deficiency by wearing a mass of brass and bead necklaces and by large heavy circular collars (neck rings) of brass and aluminum. These ornaments cover the breasts and hang down to the navel. Bondo women weave ringa out of kereng fiber. They are divided into two groups i.e. Upper Bondo or Bara- Jangar group and Lower Bondo. Hill Bonda settlements are situated on high level lands such as hill tops and hill slopes surrounded by bounties of nature. The shrine of Hundi, the village presiding deity is found at the entrance. Patkhanda Mahaprabu-the Creator and the Supreme God is represented by a long sword kept in a banyan tree in Mudulipada village. The megalithic platform called Sindibor is built either at the centre or at a convenient place in the village where the village meeting is held. Bondo society is broadly divided into two totemistic moieties or bansha called Ontal (cobra) and Killo (tiger). Ontal is the most numerous and is considered superior to the Killo. The next biggest social unit is the exogamous patrilineal clan organization, which is galled kuda and which comprises a number of families who are believed to be descended from a common ancestor. Their family is nuclear, patrilineal and neolocal. In many cases, wife is elder than her husband. The most important events in life are birth, marriage and death, and each event is observed with certain rituals by the Bondos. They have their own traditional community council headed by Bada Naik assisted by Pujari / Sisa their priest, Dishari, medicine man – cum Austro loger and Challan / Barik, their messenger to handle their customary affairs. 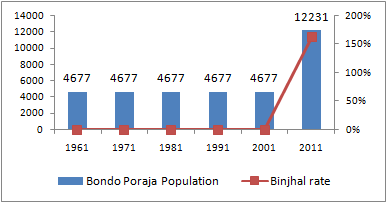 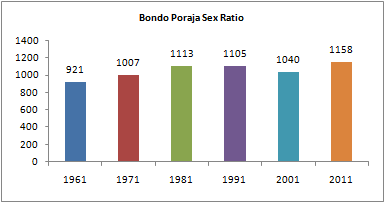 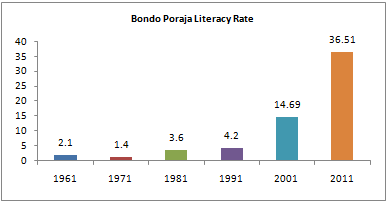