Other Distinct Socio-Cultural Features : The Binjhias believe that their original home was Kolanagari in the Vindhya valley in the central provinces. From Vindhya hills they moved east-wards to Chhotnagpur, Keonjhar, Sundargarh and Barasombar. Long time ago they called themselves as Vindhyaniwasi. But after settling down at Chhotnagpur, gradually they were called as Binjhia by the local people. The Binjhia settlements are large and homogenous with different exogamous clans living in separate clusters. They worship a number of benevolent and malevolent spirits. Their village deity, Budharaja’s abode is located in a thick patch of forest at one corner of the village. They have the cult of ancestor worship – pitru puja at the clan and lineage levels. Barter system is still being followed by them at the village community level as well as in the weekly markets. Women take an active part in all forms of socio-economic transactions. Their social, economic and religious life is strongly influenced by a strong bond of kinship among clan members. The structure of clan starts at level of an extended family called dibiris. A cluster of dibiris comprising a local group of families up to three generations form a jama - a minor lineage. Several jamas in a village constitute a major lineage - khumuri. The latter make a small clan - barga. The clan is composed of bargas and headed by a Gauntia. They prefer cross-cousin marriage and allow levirate, sororate, remarriage of widows and divorcees. They practise burial of the dead in separate burial grounds reserved for different lineages. 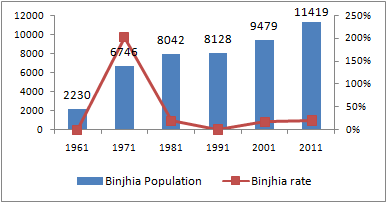 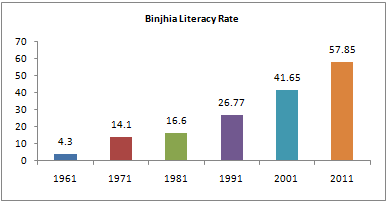