The term Bhumia is associated with the word bhumi, meaning land. The Bhumia live in separate hamlets in hetrogenous villages. The tribe is divided into two groups: Bada and Sano, each of which is again divided into a number of exogamous totemistic septs (Bansa), such as, Bagh (tiger), Nag (cobra), Cheli (goat), and Surya (sun), etc. Ordinarily families of one bansa reside in a village. There are separate hamlets for different bansas. In most cases they maintain monogamy. Marriage by negotiation is regarded as ideal. Bride price is paid either in cash or in kind, in the form of food grains, goat and mahua liquor. Acquiring mates by elopement, exchange and capture is in vogue. Remarriage of divorcee, widow and widower as well as junior levirate, sororate and cross cousin marriages are also prevalent in their society. The Bhumia usually practise cremation for the dead but burial is done for unnatural deaths and dead children. Death pollution is observed for ten days. In their religious beliefs and practices they are more inclined towards Caste Hinduism with traces of tribal religious practices. Budhi Thakurani seated in a thatched roof at the centre of every Bhumia village is their village deity who is worshipped on all important occasions. Besides, they worship other village deities like Nisani, Mauli and Ran Devata. The Naik is their traditional village headman and Bhatanaik is the regional head. At the village level, Pujari, Dissari are sacred specialists and Challan acts as the village messenger. Matters concerning village feuds, intra and inter community disputes are settled in the regional council. During freedom struggle the involvement of the Bhumia community under the leadership of Martyr Laxman Naik bears testimony to their ethnic solidarity and prowess. They are very fond of dance and music. 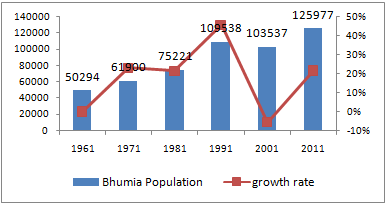 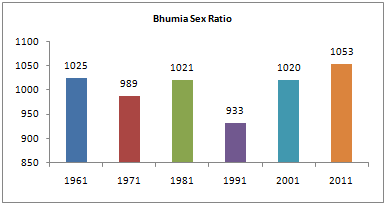 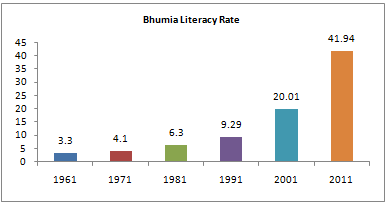