The Banjaras or Banjaris are traditionally a nomadic tribe of carriers and drivers of pack-bullocks in Odisha, They have several synonyms like Vanjari, Laban, Labana, Labhana, and Mukeai (SCSTRTI:1988), Bepari, Boipari, Brinjari, Vanjari, Wanjari etc. (Singh:1996). The name probably has come from two different sources: Banijya - trade or Banachari- the forest dwellers. The Banjara trace their descent from Lakhi Banjara, who used to move from one forest (ban) to another with his merchandise. According to Russell and Hiralal (1916) the tribe has migrated from Rajputana and its surrounding places. Formerly they were migratory in their habit and sold commodities in various places moving in a large group and carrying the goods on their bullock-carts. It is reported from history that the Banjaras were employed by the Hindu as well as Muslim kings to carry necessities for the soldiers to the war front. It appears that the tribe in course of time migrated to different places of Odisha through Central Province and Bihar. Traditionally, the Banjaras were semi-nomadic rural traders who traded salt and other commodities driving pack-bullocks. In course of time, when they permanently settled down in the villages of Kalahandi district, the then Zamindars appointed some of them as revenue collectors granting them rent free lands. Some of them reclaimed forest lands for settlement and cultivation. Some others either continued with their traditional occupation of trading by opening petty shops in the villages or by becoming peddlers. The rest i.e., those who could not pursue their traditional occupation became wage earners. The dominant section among them traditionally associated with trading of salt is called Laban/ Labana/ Labhana /Labani. They are believed to have migrated from Rajasthan as evident from their own "Banjari" dialect and typical dress pattern. Banjaras are distinguished by their Ghagra, Orhni, Kanchhi and Zhabta dresses, silver ornaments and tattoo marks. The tribe is divided into several exogamous hierarchically graded Bansas like Rathor, Chouhan, Pamar, Odtia, Turi etc. having their respective tutelary deities who are ceremoniously worshiped during the Dasara festival. The tribe is strictly endogamous. Adult marriage, monogamy and marriage by negotiation with payment of bride price (Para) is ideal and common. Other kinds of permissible marriages are sororate, remarriage of divorcees, widows and widowers including junior levirate. Divorce is permitted. Birth pollution lasts for 21 days. They cremate the dead. They get the services of Brahman priest, barber and washerman. Each Tanda (settlement) of the Banjara is a political unit having its own set of traditional leaders. Naik is the secular head of the Tanda council. His post is hereditary. All important matters are brought to his notice for opinion and intervention. Karvanri is the village messenger who holds a key position in the Tanda organization. Besides summoning people to the village meetings, he maintains the account of the cash and kinds collected for all festivals and fines collected from the offenders. Bhagat is the sacerdotal leader. 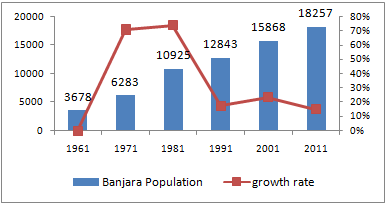 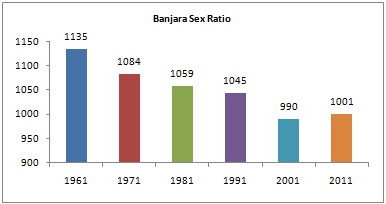 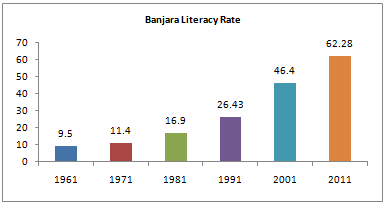