The Mundari is a part of Munda Tribe. They have a hierarchy of clans. Clusters of clans maintain group solidarity and regulate marriage and socio-economic relationships. In some villages, dominant clans own land. The clan elders mediate in fixing marriage and bride price. Sing Bonga- the Sun God otherwise called Dharam Debta is their supreme deity. Other deities are Basuki Mata, the Earth Goddess, Dessuali, Marang Bonga, Karam Bonga, Laxmi, etc. Their priest, Pahan worships the deities on festive occasions at Sarna, the sacred grove located at the village outskirts. Among them the common mode of acquiring a mate is through negotiation. Other approved modes are by mutual consent, elopement, by service, intrusion and through exchange. Junior levirate and sororate are allowed. They practise both burial and cremation. Death pollution lasts for ten days and ends after purificatory rituals and feast. 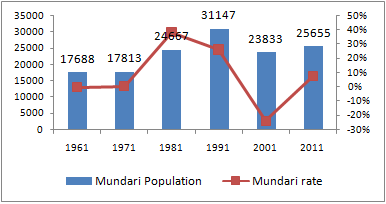 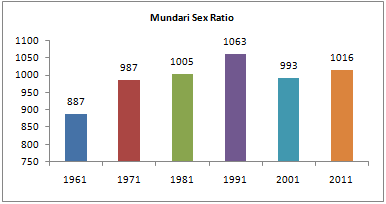 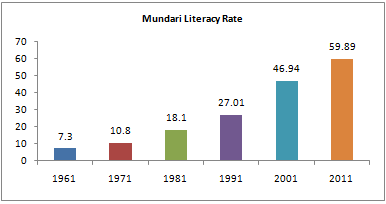