MUNDA is a major tribe of Odisha largely concentrated in the districts of western Odisha namely, Sundargah and Sambalpur. They are also known as Horo-hon or Mura meaning the village headman. They believe that they are the descendants of Sing Banga the supreme god and the creator. The Munda along with the Kol, the Kollohara, the Ho and the Mundari have originated from the same ancestral stock who have migrated to surrounding regions of Odisha, Madhya Pradesh, West Bengal and Tripura from their original habitat in the Kolhan region of Singbhum district, Bihar. In Mayurbhanj they are known as Kol, Kolha and Ho. They are called Kol in Bihar. Munda Lohara constitute a section of Munda who are blacksmiths. They are divided into four sections, Santhali, Nagpuria, Kolhani and Tamadia. Apart from their mother tongue, Mundari, they use Odia and its script for communication. They have a hierarchy of clans. Clusters of clans maintain group solidarity and regulate marriage and socioeconomic relationships. The clan elders mediate in fixing marriage and bride price. Sing Bonga- the Sun God otherwise called Dharam Debta is their supreme God. Other deities are Basuki mata, the Earth Goddess, Desauali, Marang Bonga, Karam Bonga, Laxmi, etc. Their priest, Pahan worships the deities on festive occasions at Sarna, the sacred grove located at the village outskirts. Among them the common mode of acquiring a mate is through negotiation. Other approved modes are by mutual consent, elopement, by service, intrusion and through exchange. Junior levirate and sororate are allowed. They practise both burial and cremation. Death pollution lasts for ten days and ends after purificatory rituals and feast. Traditionally the Munda are an agrarian community. They are recognized as the first settlers (Khunt-Katidars) who cleared forests and established villages. 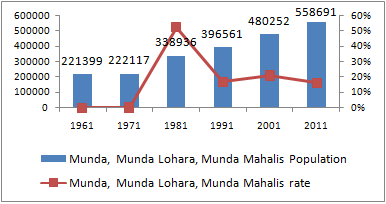 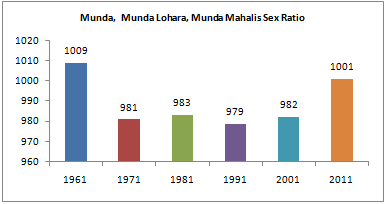 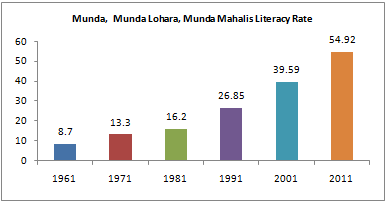