The name KOLHA is derived from the Monad word Kop, which means ‘they are their own’. The Kola are early settlers of Kolhan region of Singbhum district of Bihar and have different appellations like Kol, Kolha, Ho, Munda, Mundari and Larka Kol. In course of time they migrated to Madhya Pradesh, Maharashtra and Odisha. The Kolha settlements are generally uniclan and homogenous. In multi ethnic villages they live in separate hamlets. Family is mostly nuclear, patrilocal and patrilineal. The tribe is divided into several exogamous clans (kur). Family is monogamous. Polygyny exists in some cases. Marriage through negotiation (Andi) is regarded as prestigious. Bride price (Gonam) is prevalent and is paid both in cash and kind, in the form of cows and goats etc. Cross cousin marriage, junior levirate, junior sororate, remarriage of widows, widowers are permitted. The other forms of marriage are by capture (oportipi), by mutual consent (Raji Khusi) and by intrusion (Anadar). They observe birth pollution for a period of seven days. The Kolha practise burial for their dead and observe death pollution for seven days. They have their tribal deities like Sing Bonga, Nagea Bonga, Marang Bonga, Basgea Bonga, Borum Bonga, Sendra Bonga propitated by their traditional priest, Dehuri. The Kolha have their own traditional community council. Pradhan is the village head who is assisted by village elders and a messenger (Dakua). The regional head is known as Sardar. The Kolha are quite fond of dance and music. They use their traditional musical instruments Madal, Dholak, Tomka and Mazina and dance during festive occasions. 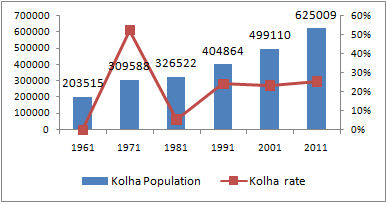 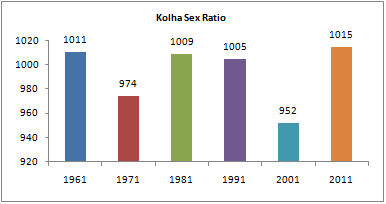 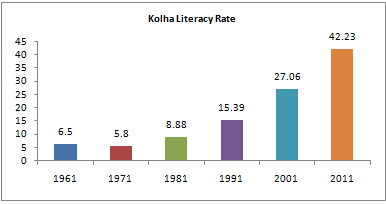